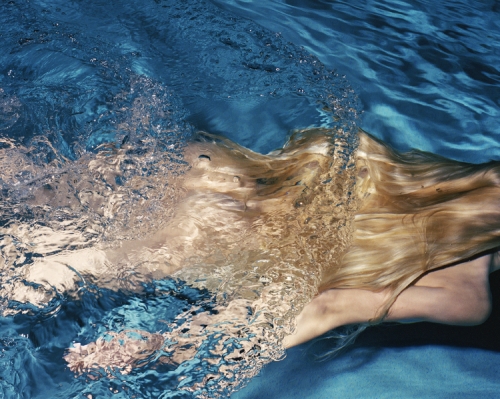 Water has long stimulated humanity’s imagination: it is mysterious, powerful, yielding, and fundamental for our existence and survival. In “Underwater: Michael Dweck & Howard Schatz,” now at Staley-Wise Gallery, two photographers capture some of the allure of the aquatic. They depict its physical and mystical qualities in prints that are sensuous, erotic, and allusive.
Both Dweck and Schatz portray voluptuous, fantastical scenes of nude women in water and staged in whimsical aquatic tableaux. In Schatz’s The Last Supper (underwater) (2008), the artist recreates da Vinci’s famous painting with a troupe of sub-marine harlequins substituted in for Jesus and his apostles. The checkered and optically illusive patterns of the players’ dresses reflect against the rippling surface above, and the water gives the entire scene the appearance of weightlessness. Schatz delights in optical effects, having formerly worked as a leading ophthalmologist before retiring to pursue art full time. “I like the work I do. Having a passion is a lucky thing,” he told The New York Times. In Underwater Study #2917 (2008) Schatz shows a voluptuous model, casting a warm, otherworldly pink light on her, with small bubbles clinging to her nude body as she swims above the viewer.
Michael Dweck’s photographs experiment with presentation and the invention of narrative. In his “Mermaid” series, such as Mermaid 128, Aripeka, Weeki Wachee, Florida (2008), Dweck presents in black and white a topless young woman from the chest up, against a background of sky and ocean. She, the object of our gaze, looks over her shoulder, long hair obscuring her identity. Through these means and the framing of the title, Dweck casts the young woman as a mermaid, a mythical half-human, half-fish creature said to kill sailors. She is sexually alluring and somewhat threatening. In his vibrantly colored Wallpaper: Mermaid 105, Miami, Florida (2007), Dweck has printed his photo in enormous scale, creating a custom wallpaper printed on canvas. Two other photographs of nude women are printed on glistening, phallic surfboards.
Both artists revere the pretty and the unpredictable—here in the form of turbulent water flowing over womens’ bodies. Each has emphasized the effect in different ways, with particular attention to the luscious surfaces, colors, and details that photography excels in.
“Underwater: Michael Dweck & Howard Schatz” is on view at Staley-Wise Gallery, July 10th–Aug. 29th, 2014. 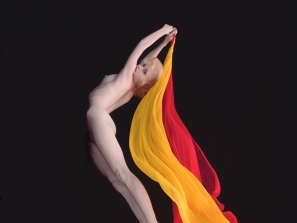