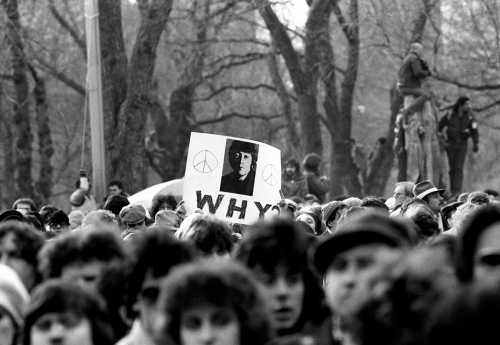 You may have thought Harry Benson had seen it all.

His camera front-loaded the pillow-fighting Beatles into the 1960s, hitting the tarmac with them in New York, and closed the decade by capturing Robert F. Kennedy’s assassination, Ethel Kennedy’s hand taking up much of a frame, as if to stop the tragedy cold. The civil rights movement, the Ku Klux Klan, Truman Capote’s Black and White Ball, Muhammad Ali and other assignments from the magazines Look, Life and Time, along with seemingly every lethal crisis and celebrity hideaway in the world.

In the 1970s, Mr. Benson shot a hard-driving, show-offy young real estate heir named Donald J. Trump shadowboxing as if with his future on the roof of Mr. Trump’s Fifth Avenue tower. Some 20 years later, Mr. Benson posed Mr. Trump in the money cage of his casino, the Taj Mahal in Atlantic City, with a million dollars in cash in his arms. “He was trying to hold on to it,” Mr. Benson said. “It was against gaming commission rulings for him to even be there.”

After Mr. Trump married his wife, Melania, in 2005, Mr. Benson captured them in the gilded-to-the-gills dining room of their penthouse, Ms. Trump spilling out of a skimpy black dress in a Vargas-girl pose. “They don’t want people to see that one anymore,” Mr. Benson said.

Who could have predicted he may next encounter Mr. Trump in the White House? Mr. Benson, 87, has photographed every president since Eisenhower, but he is not prognosticating about an invitation to Washington. “We’re in for it now,” he said of the president-elect in the Scottish accent he has held onto from growing up in Glasgow. “He hasn’t changed.”

Looking back has become a full-time occupation for the photographer. “Harry Benson: Shoot First,” a documentary about Mr. Benson directed by Matthew Miele and Justin Bare, opens on Friday. The International Center of Photography will soon announce that Mr. Benson is the recipient of its 2017 Infinity Award for Lifetime Achievement, ensconcing him next to Richard Avedon and Berenice Abbott, among others.

And on Dec. 16, the Staley-Wise gallery in SoHo will unveil “Harry Benson: Get the Picture,” a career-spanning exhibition that Mr. Benson refuses to call a retrospective. At the Carlyle hotel, a selection of Mr. Benson’s black-and-white photographs — many of eminent guests, dead and alive, who have stayed there — is on view indefinitely. In 2014, he was invited to photograph Queen Elizabeth in Buckingham Palace, and in 2008, she bestowed the order of Commander of the British Empire upon him.

Six feet tall, Mr. Benson still fits easily into the suits and silky sports jackets made for him in London, as well as the flak jackets, perfectly faded bluejeans and L. L. Bean footwear that have carried him and his cameras from spreading famines to a primping Dolly Parton, ski-masked I.R.A. fighters to a bare-breasted, chalky-faced Kate Moss in Paris.

“Other photographers would ask me, ‘How did you get onto the second floor of the White House?’” Mr. Benson said. “I would tell them, ‘I didn’t dress as if I was the maintenance man.’”

He had settled into one of two graciously sagging white couches in his Upper East Side living room, a mug of tea in his hand, his dachshund, Tilly, resting her head in his lap. Mr. Benson and his wife, Gigi, who manages the business that is Harry Benson, have lived in the apartment for 48 of the 50 years that they have been married, raising two daughters. When they maintained a working studio there, Mr. Benson persuaded Diana Vreeland to sit on the floor, where she assumed the lotus position.

He covered Galanos, Armani, Halston, Saint Laurent, Bill Blass and Oscar de la Renta. Ralph and Ricky Lauren dropped by the Bensons’ apartment recently to revisit the photographs Mr. Benson had taken on their Colorado ranch for The New York Times Magazine in 1983. “I think he really came to compare his health with mine,” Mr. Benson said. “We’re the same age.” (Mr. Lauren is 77.)

Though neither of the Bensons rides, they also own a house in Wellington, Fla., horse country adjacent to Palm Beach.

He blames his humiliating expulsion from secondary school, at 13, for a lasting anger and his unrelenting competitiveness. His father, the director of the Glasgow Zoo, gave him his first camera, to keep away trouble.

He brought that fight with him when he crashed a party and so charmed Lord Beaverbrook’s son, Sir Max Aitken, that a job materialized on Fleet Street. Mr. Benson met Gigi at a Houston charity ball while he was traveling with Prince Philip for The Daily Express in 1965. She was wearing a white peau de soie Teal Traina dress that she remodeled for their wedding two years later.

Mr. Benson sometimes speaks of the past in the present tense, but on Dec. 1 he was thrust back into the present’s glare by a headline in The New York Post, “The Glamorous Gals Behind Trump’s Cabinet Picks.” The article noted that Hilary Geary Ross, whose husband, Wilbur Ross, is Mr. Trump’s nominee for commerce secretary, is one of Mr. Benson’s friends and his collaborator on two books: “Palm Beach People” and “New York New York.”

Jay McInerney wrote the introduction to “New York New York,” which was published in 2011. In 1984, Mr. Benson had been on hand with his camera for the fame-making publication of Mr. McInerney’s “Bright Lights, Big City.” “They all came trooping through,” Mr. McInerney said. “Harry Benson, Annie Leibovitz, Mary Ellen Mark. But Harry is different. Without naming names, some photographers are kind of dictatorial. He’s humble. It’s genuine. He eases you into being comfortable.”

Muffie Potter Aston, a benefit-circuit mainstay, who appears in “New York New York” with her family in their Park Avenue living room, said: “Most photographers are looking for the photograph of their lives. Harry looks for the life in the photograph.”

The Rosses “are close friends,” Mr. Benson said. “We see them a lot in Florida. I’m not sure that Washington is where she wanted to be. She would rather be at the Court of St. James’s.”

His photograph of Ronald and Nancy Reagan dancing at the White House, shot on assignment for Vanity Fair in 1985, was used for the cover, reportedly saving the struggling magazine and the job of its editor at the time, Tina Brown.

Were he to shoot Mr. Trump in the White House, it would be “in the Oval Office,” Mr. Benson said. “I’d get all the gadgetry of power around him, and then, more and more.” For a Vanity Fair cover, Mr. Benson said, he would pose Mr. Trump “in the shower,” the president with no clothes.

The actor Alec Baldwin, who has found a new calling parodying the president-elect on “Saturday Night Live,” has known Mr. Benson since the photographer came to his Upper West Side apartment in the 1980s, when Mr. Baldwin was just beginning to make movies. Now he would like Mr. Benson to portray him “running for president, what else?” he wrote in an email.

In the absence of the bygone haunts Elaine’s and Swifty’s, Mr. Benson now sees society friends and famous subjects at Sette Mezzo, the disingenuously unassuming Italian restaurant in his neighborhood. “We just ran into Paul McCartney there,” he said. (They hugged and had a brief chat.)

From the sprawling terrace of his apartment, he can look south over Manhattan and west to the Dakota apartment building across Central Park, where John Lennon lived and died. “I was sad when he was shot,” Mr. Benson said, “but not surprised.”

“He was going around with all this ‘Give peace a chance’ stuff,” he added. “I told him, ‘John, now you’re meddling in United States foreign policy, and the Nixon administration has its eye on you.’ Chapman would say to me, ‘I kept hearing his voice in my head, in the day and in the night.’” Mr. Benson created some of the most arresting shots of Lennon’s fans in mourning, and of course not captured simultaneously on iPhones.

But Mr. Benson is perfectly fine with photography becoming an arm of social media, providing Instagram renown for teenagers and Kardashians. “Let them enjoy themselves,” he said. “It’s a boom in photography now. The only ones I hate are publicists.”

There may well be agents of higher standing between him and Mr. Trump after the inauguration. But Ms. Ross, at least, isn’t worried about his being welcomed to the White House. “Everybody loves Harry,” she said, “so I’m sure he’ll get invited everywhere.”