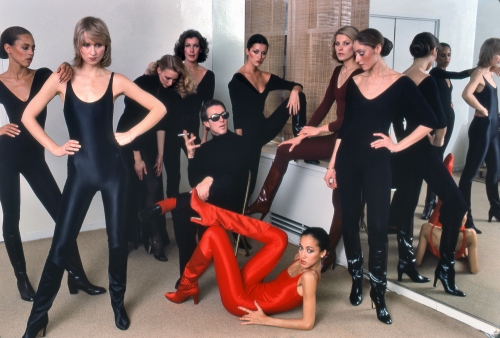 Photojournalist Harry Benson has been a witness to a great many of the major political and social events in modern history. With an uncanny instinct for being in the right place at the right time, his unforgettable photographs have found their way into the national consciousness.

In addition to this monumental body of work there is yet another side to Benson’s career: the fashion world. Photographing the industry since the 1960s, Benson covered what has become the golden age of American fashion – Halston, Ralph Lauren, Bill Blass, Geoffrey Beene, and Oscar de la Renta; in addition to the French greats Yves St. Laurent, Madame Grès, Pierre Cardin, and others.

This exhibition includes intimate behind-the-scenes photographs of the fashion houses preparing for the runway, the work rooms, the designers at work and at home, as well as the glamorous façade of the models being made up and then in full regalia. We also see the fashion editors and the ladies who lunch who purchase and wear these designs. Benson has documented the enormous effort and collaboration involved in the fashion industry’s most influential players, and he captures the essence of a moment in time.

Harry Benson was born 90 years ago in Glasgow, Scotland and began working for English newspapers in his early twenties. He moved to America and began working for LIFE Magazine in 1967. Among other awards, Benson was named a Commander of the Order of the British Empire in 2009 in recognition of his achievements in photography. Retrospective exhibitions of Harry Benson’s work have opened at the Scottish National Portrait Gallery in Edinburgh, the Scottish Parliament in Glasgow, the Smithsonian National Portrait Gallery in Washington D.C., and the Lumiere Brothers Center for Photography in Moscow. More than a dozen books of his work have been published and a feature-length documentary film of his life and career, titled Harry Benson: Shoot First, was released in theaters in 2015.