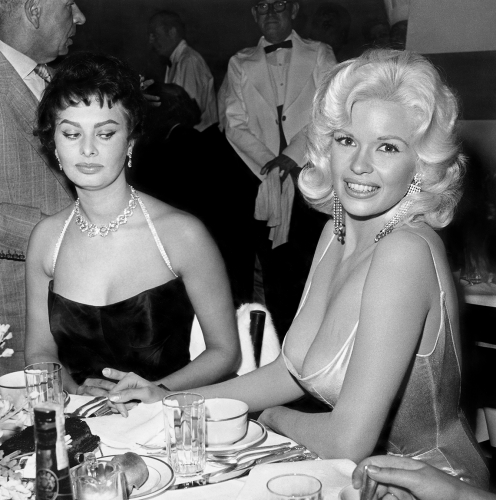 It’s hard to pinpoint when, exactly, the first documented instance of side-eye appeared. But many credit this 1957 photo of Sophia Loren and Jayne Mansfield. Newcomer Loren had just skyrocketed to stardom in Europe when she became the most photographed performer at the 1955 Cannes Film Festival. The Beverly Hills party two years later was meant to officially welcome Loren to Hollywood. But the Italian bombshell found her spotlight unexpectedly stolen by Mansfield. In a recent interview with Entertainment Weekly, Loren confirms that, yes, she was thinking exactly what it looks like she was thinking.

Loren went on to explain that even though she was caught smiling or having a good time with Mansfield later in the evening, her mind was always on that dress. “No, no. Well, there may be other photos, but this is the picture. This is the one that shows how it was. This is the only picture.”

But the veteran actress, who has more than 90 film credits to her name, says that even if she was thinking all those things, she doesn’t like being associated with the photo that launched a million side-eyes.

In 2012, two-time Academy Award winner Loren told Vanity Fair she was reluctant to give interviews. “My life is not a fairy tale,” she said, “and it’s painful still to speak about it.” But Loren seems to have had a change of heart. She has written a memoir titled Yesterday, Today and Tomorrow: My Life, which was published this month. After irresistible phrases like, “Everything in her dress is going to blow,” who doesn’twant to read more about Loren’s reign during the golden age of Hollywood?