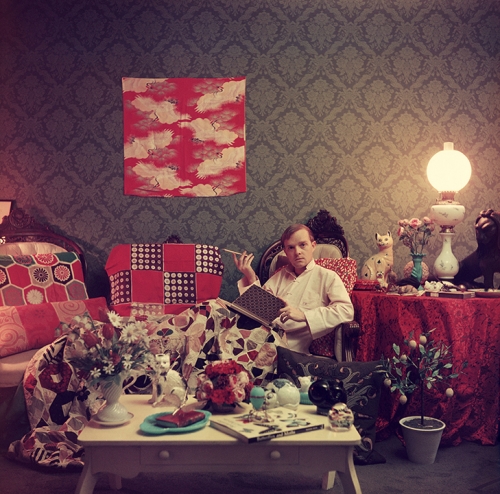 Slim Aarons (1916–2006), dubbed the “photo laureate of the upper classes,” was a self-made man whose glittering half-century career began inauspiciously at 18 when George Allen Aarons, as he was then known, became the official photographer at the United States Military Academy at West Point. After serving in combat in WWII and receiving a Purple Heart, he returned home determined never to be on another beach unless it had babes in bikinis.

For decades after the war, Aarons was on assignment in European castles, Palm Beach palazzos, and Hollywood mansions for glossy magazines like Town & Country, Holiday, Life, and Travel & Leisure. His subjects were what he called “attractive people doing attractive things in attractive places:” C. Z. Guest, Diana Vreeland, Prince Philip, Mick Jagger, Truman Capote, and the like, snapped at chic watering holes and grand estates. As Aarons summed his focus up, “I know my editor and what he likes: blondes, beds, and chandeliers.”

Beginning Friday, May 9, New York’s venerable Staley-Wise Gallery is exhibiting a rare collection of more than 30 iconic Aarons images, all signed and many in their original large formats. These exceptional photographs—most accompanied by the photographer’s own fascinating captions—capture the who, what, when, and where of the beau monde in the ’50s, ’60s, and ’70s.

The entire show is highfalutin fun: One can only imagine what Aarons’s upright cadets would have thought of the indolent slouches arrayed in The Girls of Foxcroft School Wait for Their Horses, 1960. A stroll through Staley-Wise’s exhibition will make it clear why this hardworking photographer once remarked, “I believe in fairy tales.”