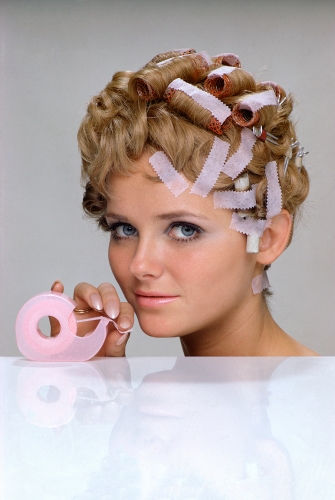 William Helburn’s work spans fashion, editorial, and advertising photography, but one feature united it all: desire.

A beautiful woman. A product. A beautiful woman holding or beholding or otherwise engaging with a product. If Helburn photographed it, he wanted you to want it. And he was very good at it, combining a sly sense of humor with an innate understanding of what makes people look and keep looking.

Just look at his photo of model Cheryl Tiegs, about to tear off a bubble-gum-colored piece of something called Scotch hair set tape from a bubble-gum-colored dispenser, looking straight into the lens. I have no idea what Scotch hair tape is or what you do with it exactly — whatever ad copy that might have accompanied it, like all the other photos in his exhibit at Staley Wise Gallery through August 26, is not included — but I want it. More accurately, I kind of want to eat it.

And I don’t smoke cigars, but one look at Helburn’s photo advertising White Owl cigars, and I am strangely drawn to them. His model, Angela Howard, dons a headscarf and robe quite obviously meant to recall Johannes Vermeer’s Girl with a Pearl Earring — except that the garments, together, form the stars and stripes of the American flag, and there’s a cigar dangling from her lips. Here’s Helburn at his beguiling best: highbrow, patriotic, and unabashedly sensual.

His perspective, particularly when it came to depicting women, was decidedly masculine. Consider his photo of Simone D’Aillencourt in Penn Station: She’s looking at the small dog she’s walking, while, unbeknownst to her, a man in a suit and hat is looking at her. Or take his photo of Joanna McCormick in a limo, dazzling in red, eyes focused on the viewer, while all around her tuxedoed men can look at nothing but her. While not exactly progressive, the male gaze is a powerful through line in Helburn’s work.

For several decades beginning in the early 1950s, Helburn was a go-to image-maker in the New York advertising world. And he embraced that identity fully: He had the model girlfriends, the silk shirts with monograms on the cuff, the famous friends, the sports cars, the fabulous vacations and homes. He was successful, in part, because he didn’t have to pretend he wanted all those things in the magazines. He wanted them without reservation — and he got them.

Helburn may not be the most subtle of photographers, but he is perhaps the most emblematic of a certain American era. He loves women. He loves sex. He loves buying things and making things look good. He is everything this country ever tried to sell you. 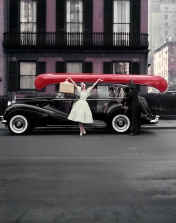