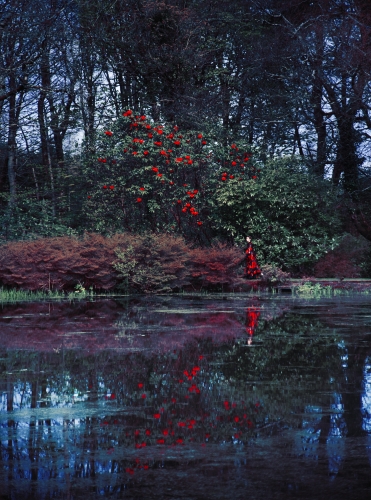 Minimalistic yet chic, elegant yet bold, meticulously planned yet so fun—that is the dynamic that Erik Madigan Heck employs in his compelling images. His incisive painter’s eye with a talent in selecting bright color schemes and ornate patterns, his artistic style is remarkably refreshing in an industry that is so heavily inundated. From the flood of florals in James Harden’s latest GQ shoot, to the obscured faces of fashion models and his preference for natural light; Heck’s photography is striking for his incorporation of unexpected elements that elevates and almost purifies the purpose of fashion photography.

Having captured the iconic faces of Tilda Swinton, Natalie Portman, and many more, Erik Madigan Heck is  one of the youngest photographers to win an ICP Infinity Award in 2013. After his cover of Time Magazine that features an intimate nude portrait of his wife and child, his upcoming book The Garden with Thames & Hudson is an intimate exploration of motherhood and a return to Nature. When you look at his cinematic photograph of a model nearly melting into a lush red rose bush for Steve McQueen, like a gorgeous Where’s Waldo game, you can see why the young photographer’s career has skyrocketed so quickly.

Musée Magazine spoke with Erik Madigan Heck after the opening night of his exhibition at Staley-Wise:

Ashley Yu: The flattening of your figures and overlapping patterns are described as reminiscent of Japanese imagery. Would you say more about that?

Erik Madigan Heck: Many people often make this reference, but I have not been very influenced by Japanese art. In fact, I’m quite ignorant to it. I grew up studying Les Nabis--Edouard Vuillard and Bonnard--and learned to flatten surfaces from the history of French painting, not Japanese.

Ashley: Do you think that growing up in Minnesota has influenced your photography, especially because it’s a relatively quiet place?

Erik: I don’t think so actually. Minnesota was just a place I grew up. It might have influenced my ideas of family and community, but in terms of art, my eyes were always set well beyond Minnesota.

Ashley: You graduated with a Bachelor’s in political science. What inspired you to transition to photography?

Erik: I studied both Political Science and Studio Art, and then moved on to get a Master’s Degree in Photography from Parsons. I have always been making photographs since I was 14. Political Science was just an interest of mine that I wanted to explore at University, as I didn’t truly believe you could learn how to be an artist.

Ashley: A majority of your models’ faces are obscured. Why is that?

Erik: I don’t believe people are the most interesting part of a composition. In fact, I often times think they take away from the rest of the image, especially in fashion. I think it’s more interesting to erase or obscure them.

Ashley: How did your exhibition at Staley-Wise come about and was the work that is exhibited made specifically for the show?

Erik: We had been in dialogue for a while, and it serendipitously came about at the right time. The works were not made specifically for the show, but they do span from the last 10 years. Some of the pieces are new and exhibited for the first time--especially the landscapes from Scotland.

Ashley: And what was the most challenging part of curating the exhibition?

Erik: The most challenging part was merging the studio work with the landscape work within the space.

Erik Madigan Heck’s solo exhibition will continue at Staley-Wise Gallery until May 18, 2019. 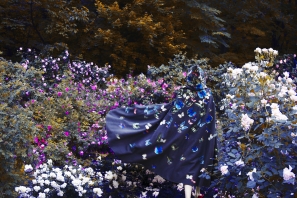 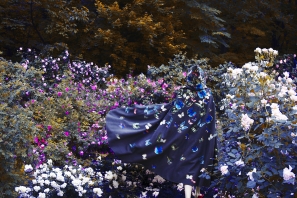 Erik Madigan Heck
Back To Top