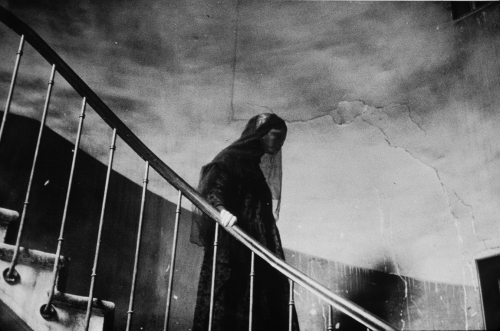 Seeing a woman eerily moving down a staircase in darkness perhaps invokes more Ingmar Bergman than Italian Vogue, but that sort of moodiness is what fashion photographer Deborah Turbeville was known for. In the world of 1970s fashion, when images that highly sexualized women were de rigeur, Turbeville entered with an anti-fashion sensibility. Instead of suggestive shots of sexy women in gorgeous clothes, Turbeville’s works were dark, emotive landscapes that just happened to feature fine attire.

Though Turbeville had worked in fashion for decades by the time she became a photographer — she started out as designer Claire McCardell’s assistant and fit model, then became an editor at places like Harper’s Bazaar, Ladies’ Home Journal, and the now-defunct Mademoiselle — she despised the fashion world. “It’s seeing all those people who you’ve seen for years, who’ve spent fifty years of their lives just looking at clothes,” she said, according to Michael Gross’s 2016 fashion photography tome Focus. “I mean, I’ve got nothing against them. It’s not really a feminist point; it’s just that I don’t want to be there.”

Turbeville picked up a camera in the first place because, as a fashion editor, she was having trouble finding someone to execute the visions she hoped for. Mentored by fashion photography luminaries like Richard Avedon and Bob Richardson, Turbeville soon began shooting her own work full time, leaving the editorial world behind. Rejecting the glossy, sexualized, and female-commodifying style of popular ’70s photographers like Guy Bourdin and Helmut Newton, Turbeville’s work instead turned inward. “It is the psychological tone and mood that I work for,” she says in Gross’s book. This began with her game-changing “Bathhouse” series for American Vogue in 1975, in which thin, wan women lean moodily against the spare, cracked walls of an abandoned bathhouse. This series established the ideal Turbeville woman to be mysterious yet romantically isolated, almost like a Brontë heroine, walking with a vulnerable power across decayed, derelict settings. There is a sullen glamour, a weightiness and sadness to these subjects that purposely counters Newton’s or Bourdin’s fantasies. Turbeville showed herself to be a woman who sees women as they are — and often in their darkest moments — not as others dream or desire them to be. A selection of these images are now on view in Staley-Wise Gallery’s exhibition, Deborah Turbeville: Photographs 1977–1981.

This show includes selections from Turbeville’s shoots for Italian Vogue, American Vogue, and others, as well as projects for Valentino, Rochas, and Comme des Garçons. The latter is particularly interesting because the Metropolitan Museum of Art is concurrently hosting its Rei Kawakubo/Comme des Garçons: Art of the In-Between exhibition through the Costume Institute, and much of the language in that exhibition’s literature, used to describe Kawakubo and her designs, could also be applied to Turbeville. Kawakubo has, the Met writes, “an aesthetic sensibility that establishes an unsettling zone of visual ambiguity and elusiveness,” and “she upends conventional notions of beauty and disrupts accepted characteristics of the fashionable body.” These ideas are present in Turbeville’s work as well, and the magnetism of their pairing is evident in the images the photographer shot of the designer’s work throughout the 1980s.

Turbeville’s images featuring Comme des Garçons attire from the 1980 Passage Vivienne series are particularly representative of Turbeville and Kawakubo’s overlapping ideals. One photograph shows models cloaked in black, one with a dark veil atop her head, staring blankly, bleakly into the distance while hovering on an elegant yet aged and battered staircase. Another casts them in shadow as a blast of light beams behind them. Vignetting creeps darkness into the corners of the images, separating the scene into pockets of light. The clothing is just barely visible, the photos purposely grainy and unfocused. For Turbeville as much as Kawakubo, these images are not about capital-F Fashion, but about cultivating a particular mood, tone, and ambiguity. It’s not just fashion photography, but storytelling: There’s something brewing, brooding there.

These same feelings are present throughout the show, whether the photographs on display were completed in 1977 or 2011, two years before Turbeville died. A shot from her first “Women in the Woods” series for Italian Vogue in 1977 features a woman in a forest wearing a lightly colored pleated dress in perfect contrast to the background, staring into the greenery’s oblivion, softly clasping her hands together while other women stand behind, none interacting with the other. In a color series for Vogue from 1984, even in clothes of ravishingly bright emeralds, fuchsias, and mustards, the women have secrets, something keeping them at a distance. In these images, as in all of her work, Turbeville pulls the characters from the inside out so the body is not just a hanger, as it had been in fashion photography for so long (and, arguably, still is today). Looking at Turbeville’s women, it’s clear that their attire and appearance is secondary. The power of the images is that they evoke the desire to understand what’s happening in the subjects’ minds.