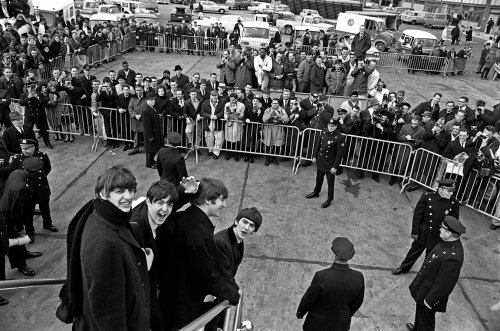 Harry Benson could be called the Scarlet Pimpernel of photography. Now 84, the Glasgow-born photographer has been here, there and everywhere – always in the right place at the right time to capture era-defining images. He photographed the Berlin Wall when it was built (second picture) and as it was torn down. He marched with – and photographed – Martin Luther King (third picture). He snapped during the Watts Riots in Los Angeles and after Hurricane Katrina flattened New Orleans. Every US president from Eisenhower to Obama (fourth picture) has succumbed to his lens, along with numerous celebrities. Meanwhile, assignments in war zones play an equally important role in his portfolio, as a selling exhibition – the first in Britain – reveals.

Benson’s knack of immortalising specific moments in time with truly memorable images is exemplified by his work on tour with The Beatles. Asked in 1964 to document the wave of Beatlemania hysteria sweeping Europe, he took a photograph of the band’s pillow fight in a Paris hotel room (44in x 44in, £17,500; other sizes available). The shot perfectly expresses the Fab Four’s light-hearted mood and – beyond that – the innocent optimism of the early 1960s.

Photographers often have the chance to see into the soul of sitters – and so it is with Benson. His written memories of the moment accompany the images in this insightful show. And so we read that he found “Amy Winehouse to be completely professional and personal, not at all what I expected”. And as the Berlin Wall came down, “People came with sledgehammers to chisel off chips as souvenirs”. Really, you couldn’t ask for a better companion to the past half century than photography’s own Scarlet Pimpernel.