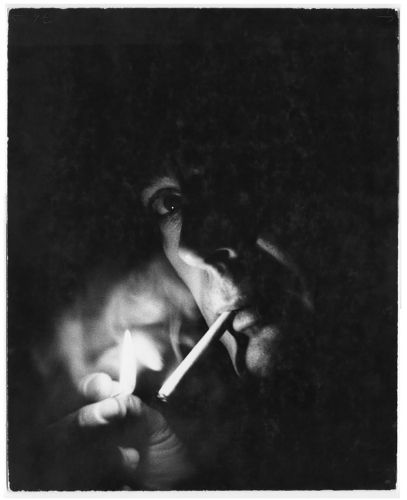 When Mad Mendebuted on television in 2007, Bert Stern was given his lasting identity.

The famed photographer, who died in 2013 at age 83, was a creative powerhouse during the so-called Golden Age of advertising in the 1950s and 1960s. Stern started as a magazine art director—actually, he started in the mailroom at Look magazine, where he became friends with a staff photographer, Stanley Kubrick. Later on, while art directing Mayfair magazine, he decided to start taking pictures himself. Like Don Draper (aka Dick Whitman), he was drafted during the Korean War, but Stern ended up serving in the army’s photo department in Japan. After returning from Tokyo he shot a series of ads for Smirnoff, including one that featured a photo of a martini glass shot in front of at the Great Pyramid at Giza. The tagline: “Dryest of the Dry.”

“It was truly a breakthrough image," said Bruce Barnes, director of the George Eastman House photography museum in Rochester, N.Y., in a 2013 interview with the Los Angeles Times. ”Until that time, most ads were illustrative of products or their benefits. Stern was moving into much more evocative, metaphysical imagery. It was a quantum leap over what had been done before.”

After that his career took off like a rocket. There was prestigious advertising, fashion and editorial portrait work—he is best known for his “Last Sitting” series of Marilyn Monroe, shot for Vogue shortly before Monroe's death in 1962. In 2013 he told Time magazine, “I fell in love with everybody I photographed.”

By the end of the 1960s Stern was churning out work in a New York mega-studio. He photographed the era’s great sex symbols—Brigitte Bardot, Sophia Loren, Audrey Hepburn and Twiggy—and shot a memorable poster for the film Lolita, which was directed by his old friend Kubrick. The poster showed the movie’s star, Sue Lyon, sucking a lollipop and wearing heart-shaped sunglasses Stern bought at a Woolworth’s on his way to the shoot.

Stern “personified the commercial photographer as cultural hero," notes the Art Directors Club Hall of Fame. His high-flying career and lifestyle was expensive, however, and fueled by amphetamines; by the end of the decade it all crashed and Stern left for Spain. Later he put his life back together; in 1982 he collected his images of Marilyn in the acclaimed book The Last Sitting, and by the early 1990s he was experimenting with new kinds of art as the digital revolution began to shake up photography.

It was during that period that I got to know Stern; I was working at American Photo magazine at the time, and we ran a number of pieces about him; I visited his New York apartment and looked at his new work but of course was more interested in the oversized “Last Sitting” prints he had lying around and in hearing him talk about his career. I invited him once to a party the magazine was having, and he showed up with two very lovely young models, one on each arm.

In 2011, well after Don Draper burst onto the cultural scene, Stern became the subject of a wonderful feature-length documentary, Bert Stern: The Original Mad Man.

Now there is a new exhibition at New York City’s Staley/Wise Gallery, “From the Archives of Bert Stern,” on view through June 20. The show features a number of images that have not previously been shown publicly.

It’s appropriate that the exhibition comes as Mad Men ends its long run on TV. Like Don Draper, Stern is remembered both for what he created and who he was.