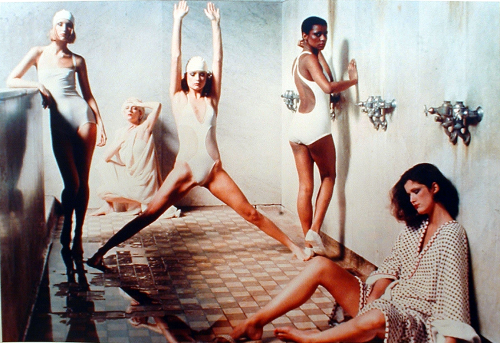 Opening this month at the Smithsonian American Art Museum, “Irving Penn: Beyond Beauty” showcases some 146 images by the legendary photographer and marks the first retrospective of Penn’s works in nearly two decades. Penn’s sophisticated compositions pushed fashion photography towards fine art, and set the tone for mid-century American beauty. In light of this exhibition, we combed through the brilliant careers of creatives who, with Penn, define vintage fashion photography. Below, we’ve selected eight of the genre’s most iconic images.

A photographer for Vogue from 1931, Horst P. Horst (née Horst Paul Albert Bohrmann—he changed his name when he gained American citizenship in 1943) captured some of the most recognizable fashion images of the early 20th century, along with portraits of dozens of notable society and creative figures—Coco Chanel, Marlene Dietrich, Cole Porter, the Duke and Duchess of Windsor, Cy Twombly, Andy Warhol, Paloma Picasso—and images of interiors and landscapes. The “Mainbocher Corset photograph,” as it’s come to be known, was published in Vogue’s 1939 September issue, presenting a mysterious, erotic study of the female form that was shockingly provocative for its time.

Hired by Harper’s Bazaar in 1936, Louise Dahl-Wolfe created ultra-glam black-and-white photographs for editorial spreads outside the traditional studio, at a time when shooting on location with natural light was still a relatively new frontier in fashion photography. Dahl-Wolfe was instrumental in launching Lauren Bacall’s career, photographing the ingenue in 1943 for the cover of Harper’s. Model Mary Jane Russell was Dahl-Wolfe’s most frequent subject, seen here all dolled up in a Dior dress in the always-chic Paris of 1950.

Originally trained as a fine artist, Irving Penn first worked in the art department at Vogue, designing  layouts, before his photography first graced the cover in 1943. Penn established his own studio in the ’50s, going on to produce advertisement images for high-end clients like Clinique and De Beers. Crisp subjects set against simple backdrops characterize his photographs, shot primarily in studio. As a portrait artist, Penn traveled across Europe and further afield, to Nepal, Cameroon, New Guinea, and Morocco. Here, Penn’s wife, dancer and model Lisa Fonssagrives—commonly hailed as the “first supermodel”—is captured in a quiet moment over tea on the couple’s trip to Morocco. While there, Fonssagrives shot Super-8mm footage of her husband at work, which can be viewed for the first time in “Beyond Beauty.”

A defining figure in American fashion and portrait photography, Richard Avedon was the main photographer for Vogue under famed editor Diana Vreeland. He continued to produce numerous covers and spreads for the magazine when Anna Wintour took command. Avedon also photographed legendary advertising campaigns, including Calvin Klein’s titillating 1980 ad featuring a teenage Brooke Shields. Avedon’s early image Dovima with Elephants (1955) remains to this day one of his most renowned, placing an elegantly gowned Dovima (aka Dorothy Horan, a mid-century Vogue model who worked often with Avedon) in between a pair of lumbering circus elephants; a seven-foot-tall print of the photograph fetched a record price of £719,000 in 2010, when it sold in auction at Christie’s to Maison Christian Dior.

Commercial photographer Bert Stern was launched into the spotlight following the success of his brilliantly simple photograph Driest of Dry(1955). The image, created for a Smirnoff ad, features a glimmering martini in the Egyptian desert. Stern’s career spanned a wide range of assignments, from cooking up ads for household-name brands like Spam and Wish-Bone, to capturing many of the most famous faces of the time. His most celebrated portrait series features the inimitable Marilyn Monroe. “The Last Sitting” series was photographed for Vogue over three days in a suite at the Hotel Bel-Air, just a little over a month before the starlet’s death in 1962, and presents Monroe as rarely seen. The intimate setting allowed for a total lack of inhibition and resulted in some 2,500 images of a glowing, giddily sensual Monroe, later published as a complete collection in 1982.

Best-known now for his ongoing columns “On the Street” and “Evening Hours” in the New York Times, assembling candid snaps of the city’s snappiest dressers, Bill Cunningham has had a long career of photographing the glamorous in their natural habitats, beginning with a stint as a fashion journalist for Women’s Wear Daily. Before his first collection of photographs was published in the Times in 1978, Cunningham teamed up with fellow photographer (and neighbor) Editta Sherman to create a charmingly anachronistic set of portraits, featuring Sherman in lavish vintage get-ups amid the graffiti and whizzing streetcars of New York City.

A contemporary of Guy Bourdin and Helmut Newton Deborah Turbeville favored an avant-garde approach to fashion photography, composing ethereal images outside the traditional studio. With unusual angles and reflections, her images depict models standing adrift or in contorted, dancerly positions. Turbeville’s 1975 “Bathhouse” series appeared in American Vogue in a bathing suit spread, where models pose languorously about the showers and changing rooms of the landmark Asser Levy Public Baths in Kips Bay, Manhattan.

Mentored by Surrealist forefather Man Ray French photographer Guy Bourdin created bizarre, sexy images that placed the female body in ambiguous and unusual settings. A frequent contributor to Vogue Paris, Bourdin also famously worked with shoe company Charles Jourdan. His photographs for their campaigns present odd moments that seem to be stills from a larger narrative, where (sometimes disembodied) legs sporting the luxury footwear wander through strange and deserted environs, contrasting the shoes’ refinement with the often just as uncanny, alienating world in which we live.