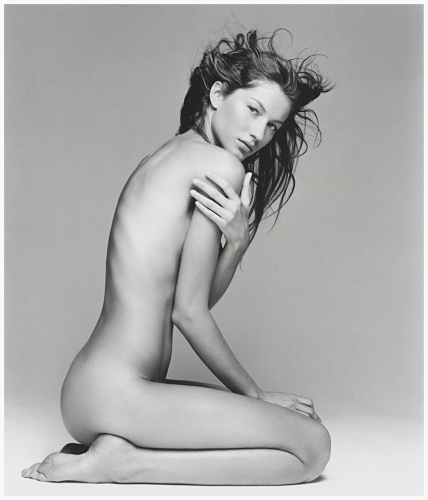 Fashion Week takes over New York this week, flooding the city with stiletto-clad fashionistas, the celebrity set, and designers from across the globe. As the models walk the runway, we invite you to take a front row seat as we revisit some of the industry’s most iconic images, from the 1980s to today.

Herb Ritts’s high-contrast black-and-white images of supermodels and celebrities—which placed bodies and faces (in lieu of clothing) at the fore—have become synonymous with 1980s and ’90s iconography. Ritts gained attention in the ’80s while living in L.A., where he took the sultry portrait of a tank-top-sporting Richard Gere that launched his career. After shooting a 1981 Elle cover starring Brooke Shields, Ritts was soon working with top magazines and brands, as well as directing pop music videos and dozens of commercials (Revlon was a frequent client). Perhaps Ritts’s most recognized shot is his supermodel-jam-packed portrait Stephanie, Cindy, Christy, Tatjana, Naomi, Hollywood (1989), published in Rolling Stone. His seminal Calvin Klein underwear campaign, featuring Kate Moss and Mark Wahlberg in tighty-whities, comes in at a close second.

Pablo Roversi’s dreamy fashion images made their first major appearance in Marie Claire, and soon after in the Italian editions of Vogue and Harper’s Bazaar, and big-league ad campaigns for cutting-edge Japanese brands like Yohji Yamamoto and Comme des Garçons. The haunting portrait of model Tanel Bedrossiantz in an ultra-femme gown from Jean Paul Gaultier’s iconic “Barbès” collection, taken by Roversi in 1992, was featured in the internationally exhibited survey of the designer’s career, mounted in 2013 at the Brooklyn Museum.

A staunch proponent of the candid photograph, Arthur Elgort ushered in a new age of fashion editorials, where models were free to romp across the frame, casually smoke cigarettes, dance on tables, or dive into swimming pools, as Stella Tennant does in this 1995 photo for Vogue. Trained first as a painter, Elgort debuted in British Vogue in 1971 and almost immediately rose to prominence; his relaxed, spontaneous style is now ubiquitous in magazines and advertisements worldwide.

“King of Kink” Helmut Newton’s photographs are instantly recognizable for their explicit voyeurism, with scantily clad models lolling about hotels and reclining languorously around the studio. Newton escaped Nazi Germany as a teen and held many jobs before eventually landing a contract with British Vogue in 1957, working later with Vogue Paris, Harper’s Bazaar, and Playboy. Published in 1995 in Vogue, Newton’s editorial spread featuring Nadja Auermann in the latest fashions—plus all manner of leg braces, crutches, wheelchairs, and casts—drew controversy for its borderline fetishization of physical disabilities.

Andy Warhol offered David LaChapelle his first commercial photography gig in the early ’80s, enlisting him to shoot for Interview magazine. Ever since, LaChapelle has amassed a vast body of both commercial and fine art work, producing slick, high-color images that take cues from all areas of art history and culture, incorporatingPop and Surrealism alongside religious iconography and consumerist ideals. LaChapelle’s pandemonious, yet still very British, portrait of the late designer Alexander McQueen and his muse Isabella Blow, skipping riotously across the frame in McQueen’s own designs, was published in Vanity Fair’s 1997 “Swinging London” issue. Fifteen years later, following the tragic deaths of both subjects, the National Portrait Gallery acquired the photograph for its collection.

Quick snaps, bright flash, raw subjects—Juergen Teller’s distinctive photographs present moments that feel plucked from personal home archives, with all the typical, rigid glossiness of editorial photography removed. Appearing regularly in alternative fashion magazines like Purple, i-D, and AnOther Magazine, Teller’s overexposed color images have also become synonymous with Marc Jacobs, who first contracted the photographer in 1998 for an advertising campaign. The portrait he took that year of Kate Moss in bed, her punky pink hair splayed around her un-made-up face, was captured in the model’s London home in a casual shoot during downtime between other major fashion campaigns.

Once the official photographer for the British Royal Family, Patrick Demarchelier has shot endless editorial and commercial images for Vogue, Harper’s Bazaar, Vanity Fair, Dior, Louis Vuitton, Chanel, YSL…the list goes on. Something of a pop culture icon now (he’s often named-dropped in TV shows and films, like The Devil Wears Prada and Sex and the City), Demarchelier photographed the similarly iconic Gisele Bündchen as a coy, fluid nude for Bazaar in 1999, when the model was first stepping onto the scene. Following the issue’s publication, the Brazilian model began popping up on magazine covers all over the world.

Another photographer to the royals, Mario Testino’s big break came in 1997 when Vanity Fair commissioned him to photograph Princess Diana for their cover (Testino had been living in London since ’76, and working for Voguesince ’83). He has since firmly staked his place amidst the greats in the pantheon of fashion photography, having worked with all the biggest names and received numerous awards, not to mention a smash-hit exhibition at the National Portrait Gallery. This casually glamorous, behind-the-scenes portrait of Kate Moss from 2006 epitomizes Testino’s desire to capture moments rather than staged scenes. Moss has long been a muse and close friend to Testino; in 2010 he published a collection of his Moss portraits, and the following year photographed her wedding to musician Jamie Hince.

After spending a decade on the other side of the camera, Ellen von Unwerth transitioned from fashion model to photographer, with work published in magazines including Vogue, Vanity Fair, and Interview, along with a great deal of commercial work for various music-world celebrities (von Unwerth has created cover art for Duran Duran, Janet Jackson, Christina Aguilera, and Rihanna, among others). Her photographs exhibit a deeply erotic view of femininity—sometimes playful, sometimes dark. Her 2009 book Fräuleinfeatures portraits of modern sex icons like Claudia Schiffer, Dita von Teese, and Adriana Lima, plus scores of images of models running amok in sexually charged scenarios, including the naughty-and-nice girls pictured here in Double Trouble (2008).

Legendary chronicler of London’s Swinging ’60s—capturing musicians, actors, supermodels, gangsters, and everyday Eastenders on film—David Bailey is as much a celebrity as his diverse subjects. Originally created in 1965, “David Bailey’s Box of Pin-Ups” was a series of pocket-sized portraits of ’60s heartthrobs, artists, and rebels, featuring the likes of Mick Jagger, Andy Warhol, Cecil Beaton, Jean Shrimpton (Bailey’s one-time girlfriend), David Hockney, the Beatles, and Michael Caine. Bailey continued to create portraits in the same straight-forward, clean style (in addition to fashion editorial and documentary work), like this photograph of model-musician Grace Jones, captured in goddess-esque splendor in 2008.

Arguably the driving force behind the era of The Supermodel, Peter Lindbergh has photographed dozens of the 20th and 21st centuries’ most recognizable models. His very first Vogue spread in 1988 bubbled over with then-newcomers Christy Turlington, Linda Evangelista, and Tatjana Patitz, among others. Now with many Vogue editorials under his belt, Lindbergh continues to create work typified by powerfully intimate black-and-white portraits, be they of supermodels—like this 2013 photograph of Cara Delevingne—designers, or movie stars.