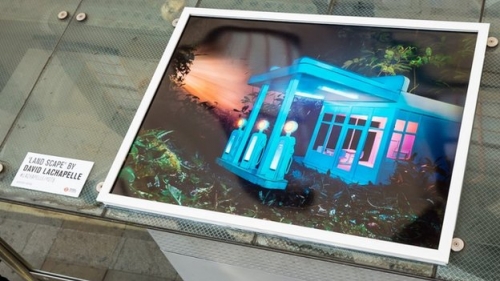 Works by one of the world's most famous photographers have gone on display on the top of bus stops in central London.

Images by David LaChapelle show glowing landscapes made from everyday objects such as hair rollers and tins cans.

The photographer is famed for his work with pop artists including Michael Jackson, Britney Spears and Madonna.

The exhibition, which can be seen by people on the top deck of buses, is part of Transport for London's (TfL) celebration of the Year of The Bus.

The pictures are of handcrafted scale models which are constructed from such items as drinking straws.

They can be seen on bus stops outside Somerset House on the Strand, Trafalgar Square and Aldwych.

eorge Annin, director of Annin Arts Gallery which helped to put on the show, said: "LaChapelle is one of the finest photographers of our time.

"His influence on popular culture is undeniable."