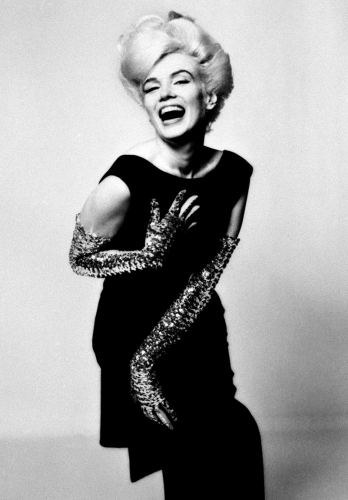 The collection comprises the last portrait shoot Marilyn Monroe did before dying of a barbiturate overdose six weeks later. Stern is a consummate craftsman, and here, in addition to seeing his beautiful work, we also see evidence of his process, with finished pictures, shots that didn’t make the cut, and a contact sheet from which photographs were selected.

Monroe appears raucously effervescent throughout the portrait series. In Marilyn Monroe: From “The Last Sitting” (Contact Sheet) (1962), we see multiple glimpses of the starlet, in which she playfully taunts the viewer with jewelry. The oversized contact sheet shows 12 photos taken during the session, including four photographs that have been crossed out, deemed unsuitable for Stern’s needs. “I took audacious pictures that got people to want things,” Stern wrote of the shoot, and those audacius pictures are carefully edited.

Marilyn Monroe, From “The Last Sitting,” 1962 (Diamonds) is intimate, a close-up shot from above, showing the glamorous Monroe laughing in a pile of diamonds. “I was preparing for Marilyn’s arrival like a lover, and yet I was here to take photographs,” said Stern. “Not to take her in my arms, but to turn her into...an image for the printed page.” Here he appears to do both: we see Monroe as a lover would, in a beautifully composed image. The black-and-white is spectacular, with the brightest whites of the diamonds against the pitch blackness of the ground at her left.

Likewise, in Marilyn Monroe: From “The Last Sitting” (Black Dress, Laughing), she twists playfully in a black dress, which swirls around her, in flight against the blank white space behind her. She casually holds her hand to her face, smiling. This particular photo was not used for Vogue, perhaps deemed too candid. In all of the photos, we see Monroe in her naturally radiant beauty, seemingly carefree and joyous, as she will be remembered always.