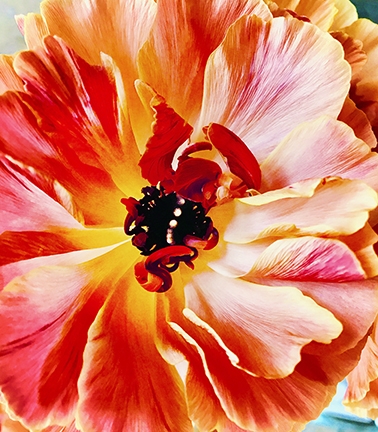 Joel Grey’s The Flower Whisperer, on exhibition at the Staley-Wise Gallery until August 16, is an explosion of floral forms and bold colors. Closely cropped and intensely rich, these images surprise with unconventional dimensions and an intimate examination of familiar flowers. What’s even more surprising is that all of these images were taken on an iPhone.

Inspired by Georgia O’Keefe’s and Robert Mapplethorpe’s floral portrayals, Grey has always had a special appreciation for flowers. He deconstructs and reconstructs the form of the flower through this photo series, which develops a fresh perspective on the flowers we’ve all seen a hundred times before. Grey offers glimpses into fantastical worlds and creates colorful abstractions simply by peering through the petals.

Often bright and at times muted, the images force us to get personal with their floral subjects. Grey is able to reveal each flower’s distinct personality and communicate a certain mood in his works, as if he is having a conversation with the flowers through his photographs. At the exhibition’s opening on June 27, photographer Duane Michals said, “You can hear them. If you listen, you can hear the different sounds.” Gesturing at one photo of a bright yellow flower in particular, he added, “This one’s breathing—listen.”

Michals went on to discuss Grey’s discerning eye for envisioning the flowers in a refreshing way. “You look at bouquets all the time, but you never look into the flowers. You never look beyond,” Michals said. “These are not observations. These are in-depth studies.” Grey’s images are calculated meditations, wherein he uses tasteful framing and clever color theory to create a narrative within each photograph. Michals considered this feat possible due to Grey’s experience as an award-winning actor and director, saying, “They’re not documentation. Maybe because Joel’s so much a theatrical person. For him, these are about theater. That’s what he brought to this genre—it’s theater.” Through the age-old techniques of color, composition, and storytelling, Joel Grey creates a brand-new look at these blossoms, proving his position as “The Flower Whisperer.” 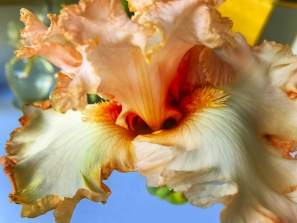